There are many factors that impede learning; one of which is an uncomfortable learning environment.  There are many factors that contribute to “comfort”: temperature, nourishment, safety, smells, peer relationships, etc. It is merely impossible to control every comfort-contributor, but it is important to try and manipulate what is possible to control.

Would you believe that one of the easiest ways that a teacher can influence students’ comfort level is actually not allowed in most schools?!  Why would making students comfortable not be encouraged?

Making classrooms cozy and inviting really makes a difference with students’ learning.  Think about it: would you rather sit for hours in a sterile white hospital room or a cozy living room?  The same applies for a classroom.  I really don’t understand why most schools have white concrete block walls, and cold ugly tiles on the floor.  The way a space LOOKS has a lot to do with how it FEELS; a room can be warm in temperature, but feel very uninviting [the converse, of course, is also true].

When I think about a student trying to learn, I always try to think of myself and how I learn best: by spreading out all the books and papers on the floor, sitting “Indian-style” on a fluffy carpet.  I [as well as most others] do not study best by sitting at desk.  Even when I am forced to sit on a normal chair or in a car, I have to sit like I’m sitting on the floor – that is just how I am most comfortable…

Most educators agree that classrooms are not comfortable.  We try to compensate by putting posters on the walls and making the walls feel more like home… But the desks and floor is what makes a difference and goes untouched…

So why doesn’t this change?  Why don’t teachers put fluffy carpets and couches in their classrooms?  Classroom size might limited, but even when size isn’t an issue, teachers are told that they are not ALLOWED to do this… and I can not for the life of me understand WHY someone would be told to NOT make students comfortable – especially when the teacher is willing to pay for everything on his/her own.

When I was teaching, I wanted to do something special for my students at the end of the year while we were studying and preparing for the state standardized tests… Knowing that the feel of a room is an important factor in comfort and learning, I decided to turn my classroom into more of a living/dorm room… I wanted to give the feel of studying for tests in college where the responsibility is on the students with the same comfort and [sort of] same atmosphere…

I started to with bringing in a huge fluffy carpet [actually, it was the exact carpet that I used to study on in college]… then I rearranged the desks so that some where in groups of 4 and others were individual or in pairs and others were pretty much attached to the chalkboard [since I wasn’t going to lecture, this made my classroom much bigger because the lecture space in the front of the classroom wasn’t needed]…

In addition to the comfortable carpet and rearranging the desks, I also wanted to bring in a small couch that I had and a little coffee table… but before I could do that, administration already started questioning.  They saw the rug I had brought in and that I rearranged the desks and they asked what I was doing.  With excitement, I told them my idea and how this was going to be a great study area for the end of the year tests…

Immediately, they shot my idea down and told me I could not do this.  Their reason was that animals and bugs could nest in the couch and there was no way to keep it clean.  They also told me to remove the rug for the same reason…

Like I good puppet, I obeyed their ridiculous request about not bringing in the very small couch.  However, since the rug was already there, I decided to ignore the request of removing it.  I mean, Come on!  A rug, for just one week, which makes the students comfortable and actually want to do work on it… yeah, I’m not removing it – get over it.

So the rug stayed.

The students LOVED it!!  “Love” doesn’t even begin to describe what I saw from just a rug in the middle of the room and regrouping desks in a way so that the class was no longer for “lecturing” but, rather, a comfortable study lounge…  Students were engaged the entire time, doing work, asking questions to me and to their friends, making little pow-wow sessions on the floor based on their friends that got similar questions wrong, etc.  It was incredible.  Students were more comfortable and open to learning than I had ever seen!

I wonder about what kind of atmosphere would form if I actually put more in the room than just one rug! 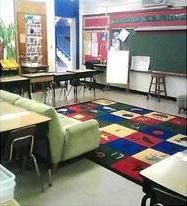 Why is it that a kindergarten classroom is allowed to have multiple rugs [and sleeping mats!] to make the students feel more comfortable but a middle school and high school is not allowed?  I think kindergarten students might be dirtier with their boogies and wet pants.  Yet this is OK?

Why is it that putting students into groups is encouraged and almost expected in order to differentiate, but if a group feels more comfortable on a rug to do group activities, this is frowned upon?

Why is it that doctor’s offices and other public areas have couches and other furniture, but they are not worried about animals and bugs “nesting”?

Have you ever wanted to make your classroom into a more comfortable atmosphere but were told not to? What were the reasons given?  I’m really curious to hear other explanations [if any] to see if there is really a good reason why comfort isn’t the norm in upper-level classrooms…

Perhaps you have tried this before with your classroom… What were the results?  Was cleanliness an issue?

I never took a picture of my classroom with the rug… But if you have pictures of YOUR comfortable classroom, email me and add them to this post to show people that it’s possible!  holestories@gmail.com